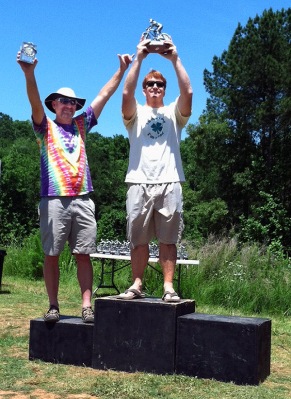 The rabbit. Spitz captured this baby rabbit last night. Mountain biking, today was the River Classic in Charlotte as part of the Southern Classic Mountain Bike Series. I had a great start and ran 2nd for most of the first half, I lost a little ground while passing back markers from earlier waves and even fell to 4th… I caught 2nd and 3rd late and set them up for a sprint. I ran out of room, finishing third, second and I were wheel to wheel, I was just a 1 foot behind him. I learned I don’t know how to throw my bike like Tour de France sprints… but I was on the rivet… 5 more yards and I think I had him. As they say in NASCAR, it was a good points days for me in the series. Congrats to Chip Harris on his first series victory!