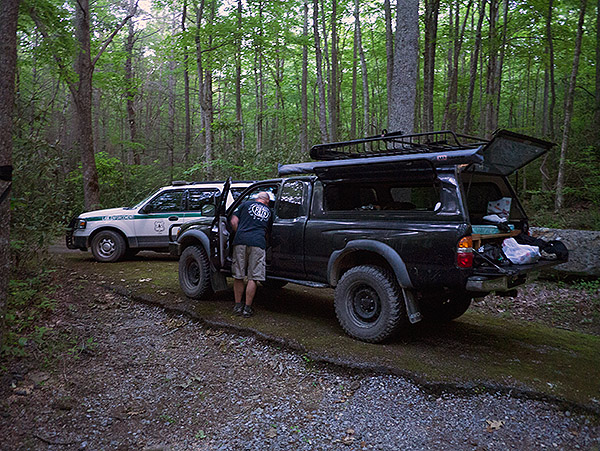 We were camped at Round Mountain Campground, a primitive campground deep in Cherokee National Forest, just a pit toilet, no water or electricity. We love it there, very quiet and isolated.

Our first night at 4:15am we were jolted awake from loud “pops” I immediately thought gun fire, but decided it was fireworks or a bear scare device. There was some talking and a couple of lights on the far side (only 8 sites were taken) of the campground, so I went back to sleep… less than 20 minutes later a tree fell, crashing down…. great now I am really awake! The dog wants to walk, so we headed out… turns out I was right (wrong?) it was gunfire, someone had driven into the campground and unloaded a gun (or two).

We searched for the brass, the cops were called (someone had to leave and drive 20 minutes to find a cell service) and inspected the damage to one campers truck, the only thing hit.

The National Forest law officer came over 12 hours after the county 911 was called – oops! At least she was cool. We pieced together the clues before she got there, a camper heard them talking…. they pulled in, a female went to the bathroom and when she returned asked what the guy was doing “I’m going to shoot my gun” she said, “you will wake the campers” he said, “I am not in a campground” and POP, a pause and pop, pop, pop, pop, pop, pop. The bullet that hit the truck was a .22, but we found a 9mm slug too…. we think the idiot fired wildly into the woods, not realizing sites were on the other side…. we were lucky!

Almost all the other campers left that morning so we had the campground to ourselves the next night. 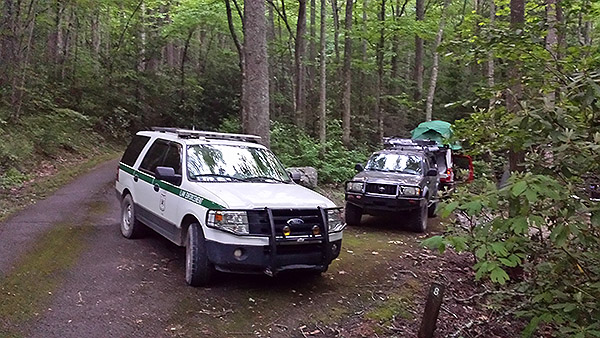