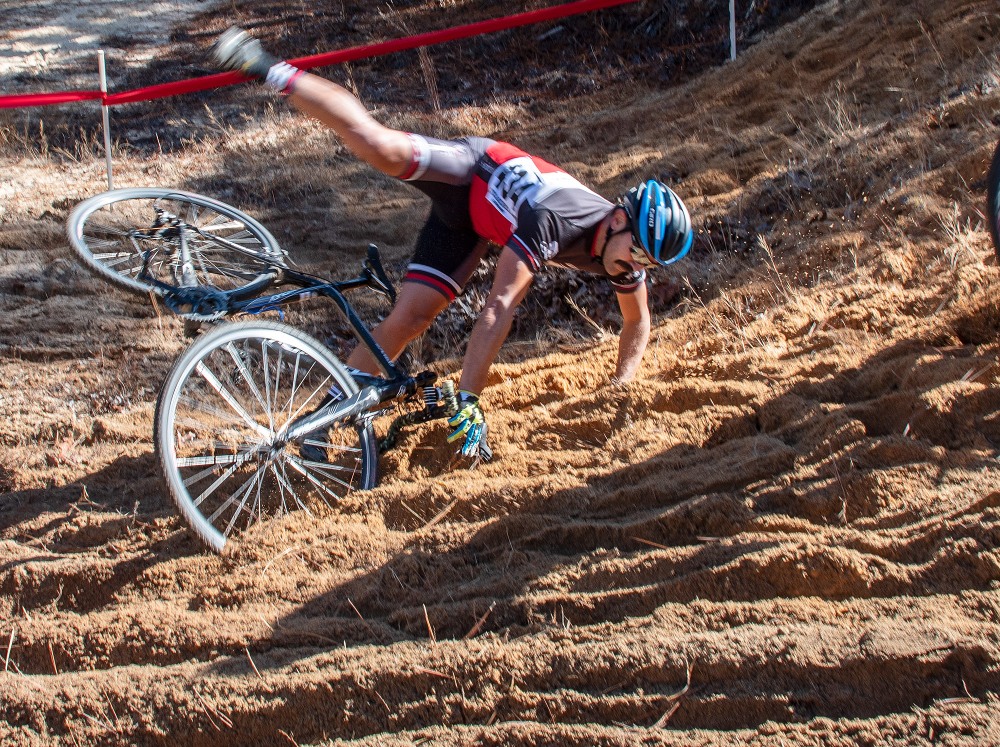 My first Cat 3 race: There were 9 of us, after 8 call ups, I was alone on the second row. We start and I sprint to 4th and pushing third till the run up. I fell back to 5th as I had a slow dismount/remount and hit the first up/down sand pit (above picture)

The race is longer than any cyclocross race I have done, I was racing younger guys, and I had to wait all day for my start (I went early hoping for one more Cat 4 race)

To sum it up, I am very pleased with my race, I challenged 3rd for 2 of the 6 laps, finished 1 spot off the podium, I gapped 5th on the last lap and can race with these boys!

Race report: This week was in Davidson, another new course for me (I skipped last year) and another interesting start. I got the call up and moved way left of the previous winner to avoid being chopped again. I didn’t get a great start and missed my pedal, so my sprint was me catching up, as we closed in on the first right turn, a guy to the left of me kept squeezing over, I gave a little elbow to make sure he knew I was there, then he leaned into me, so I had to lean back…. That pissed him off and he started yelling at me. WTF! This guy is no where near the podium, why so aggressive? Anyway, I got around him and settled into second place…. halfway through the lap I see a rider miss a turn and it’s the leader… I bury myself to build a gap (why I don’t know, since he is WAY faster than me) and come to the end of lap 1 in the lead… but he passes me and third place is on my heels… my mind starts negative thoughts “maybe I can finish third this week” – wait forget that and I hammer the next flat and build a gap over third… the rest of lap 2 and 3 I continue to build my gap over third while passing riders in the field in front of me. In fact, I would have finished 4th or 5th in the field that started 1 minute in front of ours.

North Carolina Cyclocross race #13 in Southern Pines. I always have a good day on the sandy course behind Sandhills Community College and today was no different. I got a call up, so I got to start on the front row and battled in the top 10 early. Each lap there was 5 spots I had to get off the bike, a couple of them just pure evil. I held on for 10th!

After my race, I joined Clay, Kay and Jeff for a nearly 3 hour road ride…. when we got back, I played with panning before helping break down the course!

Thanks to Clay for this picture of me racing and cheering me on!

Sunday’s race, same 8:30 start. All those muddy tracks from yesterday are now frozen. It was down to 19 degrees overnight (Glad I have good sleeping bags!) and I couldn’t even ride the course on my warmup. I even considered not racing….. for a second.

Again I had an easy start (read I was not aggressive) and it took awhile to get around less technical riders, but making a new track just off the edge of the frozen ones worked, the up/down/up/down whoops were still not ride-able. But I finished a touch better today, up to 12th.

Click to Watch a GoPro Video of my Lap 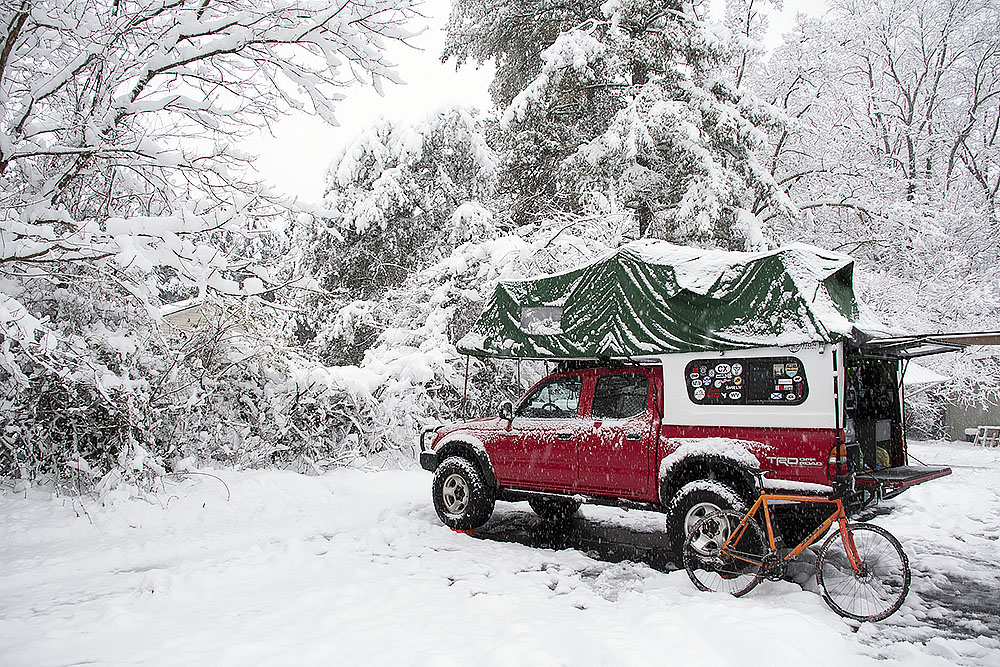 Up early for the 8:30am start. I slept great in the Flippac, despite the cold and snow all night. 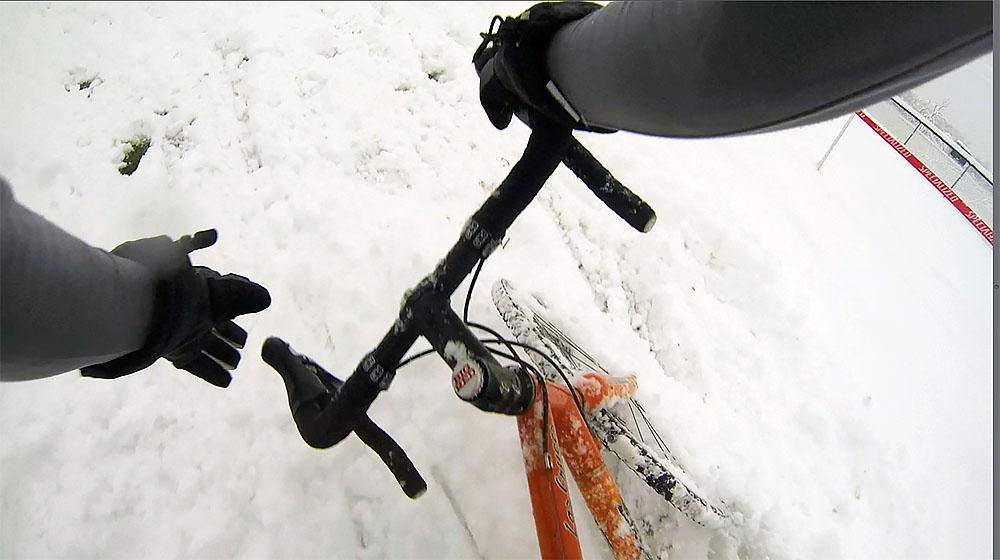 Frame grab from the GoPro on my body from one of my many falls.

My race was just OK< it was fun, but since I have not been racing, I didn’t have an aggressive start and ended up behind folks who couldn’t ride stuff I could.

I finally settled into my on the bike, off the bike, carry the bike, push the bike, repeat. There was so much snow and we were the first to race, I was pulled after only 1 lap or almost 30 minutes. Finished 17th.

As the day went on, a race groove was formed and then became a mud track. 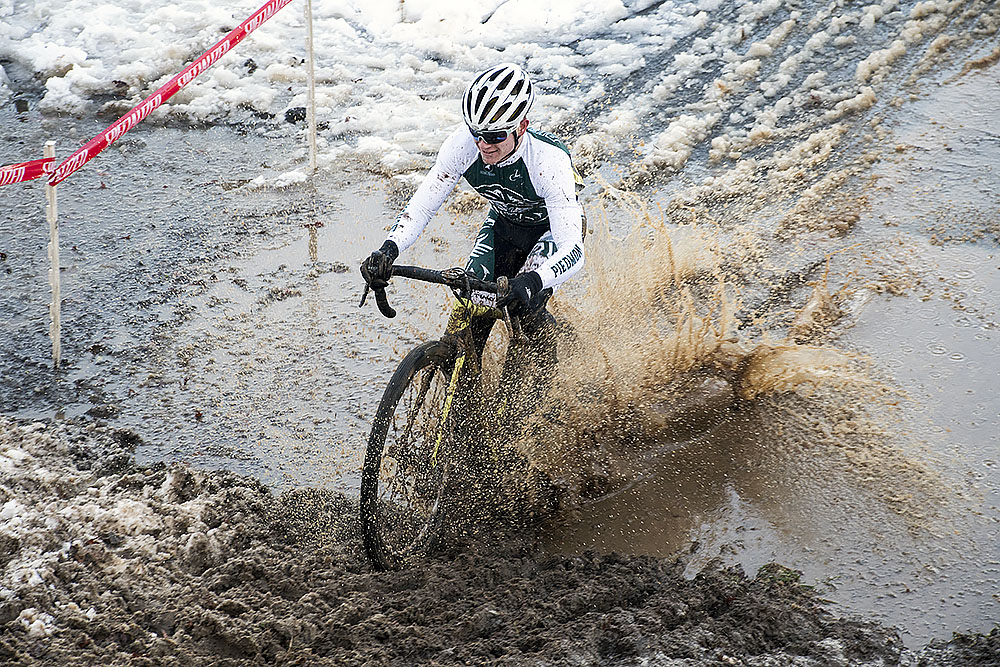 The moment you regret making your racing kit white! 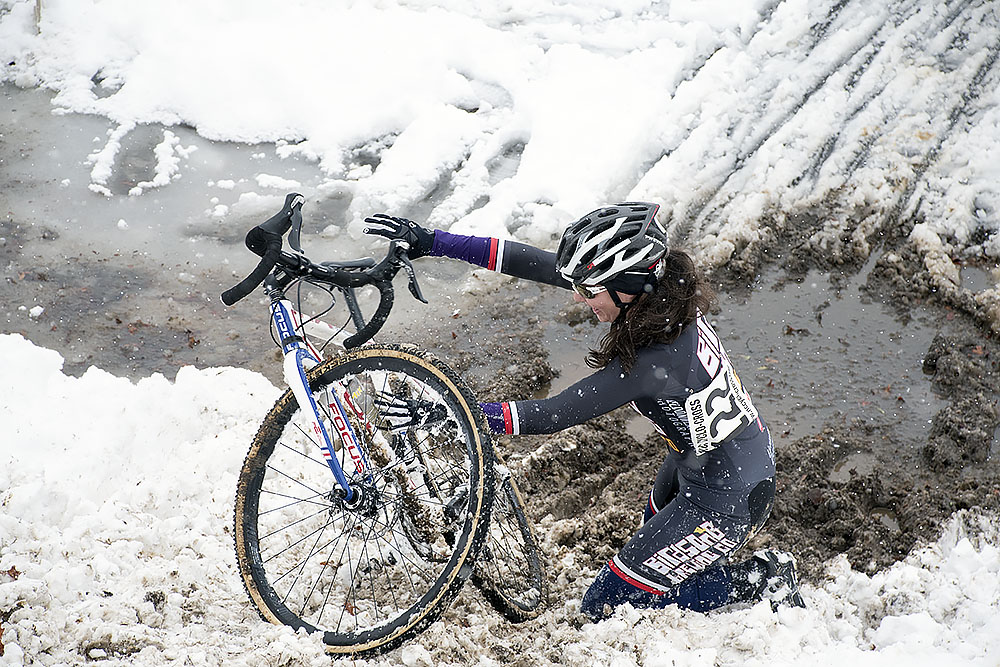 I am not sure what was worse? Deep snow or mud…. 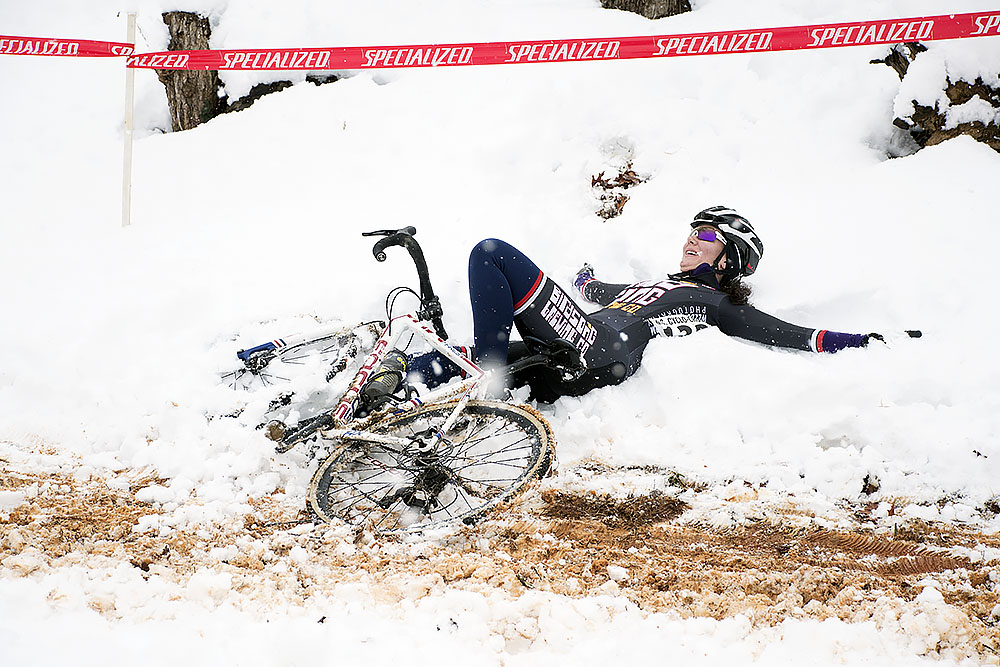 If you fall, at least make a snow angle a heckler yelled and she did it!

Back to ‘cross. The season is half over and this was only my 3rd race. The first two showed I had no speed, but today was better. I love the course at Salisbury and after starting next to the last row, I climbed through the field to finish 30th of the 49. With the talented racers in my field, I was happy, had a great battle with several guys I used to race around, and even caught and passed the jerk (work friendly term) that rammed into me on the first lap.

The day started before dawn for the drive to Lenoir and the first race of the 2016-17 North Carolina Cyclocross Series. Turns out tennis does not help one bit for cycling – I finished about 5 from dead last, but this picture from Sam captures the moment… this is the last lap and coming out of the last turn, the lap before I had caught this guy but took a beer hand-up (illegal, but it’s ‘cross) and had to work to catch him again, as I started my sprint, the chain slipped (why I am about to go over the bars) so no fun sprint to the line for us.

Then Sam and I visited Henry River Mill Village (it’s own post) and headed for a hike a part of the Mountains-to-Sea Trail to the Upper and Lower Gragg Prong Waterfalls and Hunt-Fish Falls. We got a late start, and I decided to turn around before it got dark, as it was it was after 5:30 when we got back to the truck.

Cruising along dirt roads in the mountains 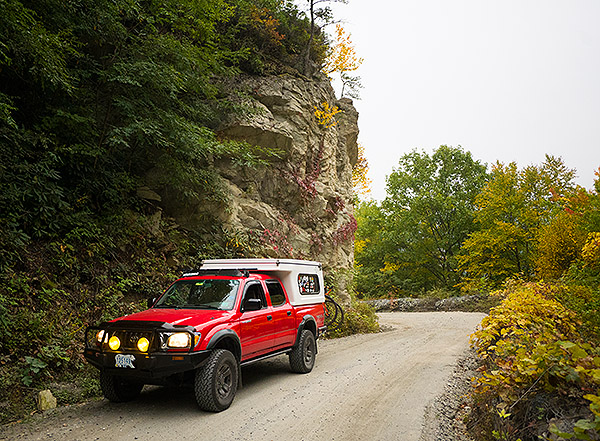 Finally we got on the foggy Blue Ridge Parkway and headed for a campground for the night. 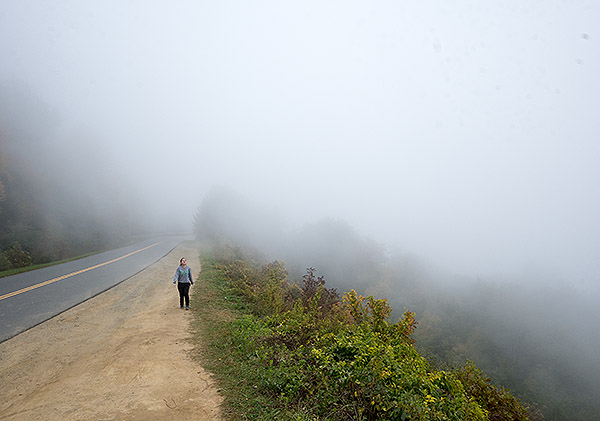 Dinner, a small fire, a quick card game and off to bed!

The final race of the cyclocross season. A muddy course at Tanglewood Park.

This mud hole was after the asphalt road climb. Left was the way to go, right was a lot deeper.

Why do you read your camera owners manual? To find out it can do 20 frames per second as a motor drive.

So I did some mud splash details.

One of the great traditions of ‘cross is heckling. North Carolina is a southern state, so everyone is nice…. good thing I moved back. Normally when I heckle Wes Richards he glares at me (he is normally leading/winning his race) but today I got a smile…. 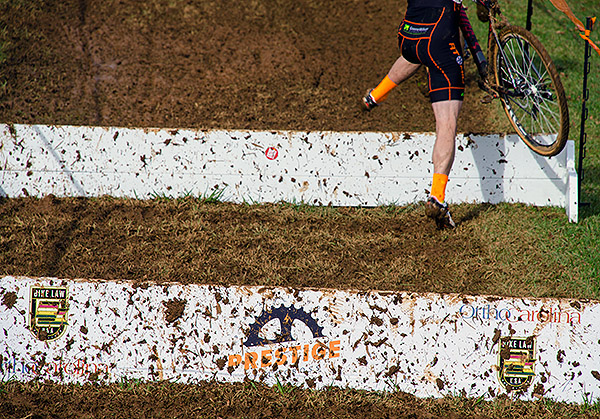 Race #13 of the North Carolina Cyclo-Cross was in Charlotte. As always, the course featured mud, sand, a big run up and a lot of fun. I played around with off camera flash and panning. My race was OK, after spending all week on the couch with my back, I laid back at the start and tried to pick off as many as I could…. finished 38th of the 46 finishers. I am still not racing as well as last year : ( 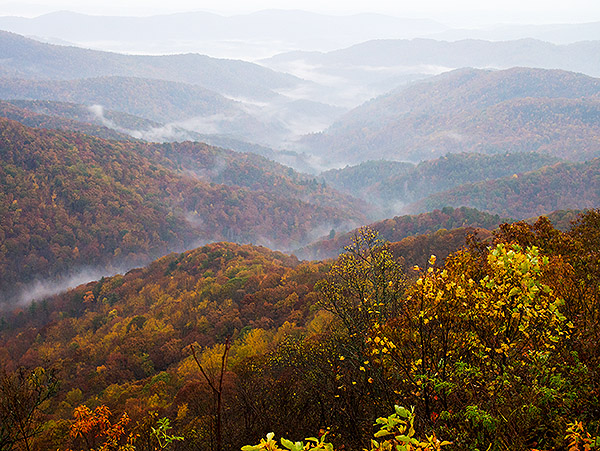 A wonderful morning drive to Boone.

Tough to see but 2 dozen turkeys (right in the woods) were around this shack, but they ran when I stopped.

I like the course in Boone, around an old fairgrounds and dirt track. The race starts and almost immediately feature a run up (I hate this one)

With all the rain, the course was a little “snotty”

My races? I was not DFL, but I could see him. I rode hard but just don’t have any speed. But I had a great solo trip, camping, racing with friends and a little hiking.